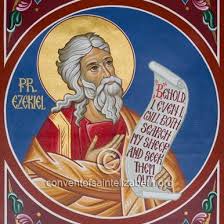 Every commentator I've ever read says that "son of man" in Ezekiel has nothing to do with that term as it applies to Jesus. But I must ask, why? We know that Ezekiel is a type of Christ, even as are all the prophets (Acts 10:43 et. al.). So why the man, but not the title? I suspect that, like so many other presuppositions, that this is one more false conclusion that has been stated so many times that it becomes reified. There is an awful lot of that that goes on in Biblical interpretation.

Ezekiel is addressed as "Son of Man" more than 100 times. Jesus is named "Son of Man" about 90 times; and so facile explanations cannot satisfy.

William Weinrich, in his commentary on St. John's gospel, shows that the Lord uses this title, "Son of Man" whenever he speaks of his impending death; but if so how does this help us understand these two terms?

As God his divine blood spilt is all availing, potent enough to atone for all wickedness of all people of all time. As man he has both taken our place in judgment, and Perfected Manhood. All of this is predicted by the prophets, and most poignantly by this particular prophet, Ezekiel the "son who is man."

Ezekiel's "son of man" is the Hebrew Ben Adam. In the Gospels the reference is to Bar enosh of Daniel 7.