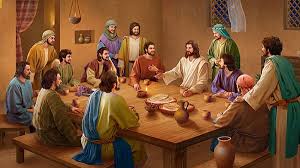 This verse is a clear illustration of how to hear Scripture the way it wants to be heard: Christologically, liturgically, sacramentally, incarnationally. All of those.

It is doubtful that 1 out of 100 Evangelicals or Fundamentalists (or Lutherans who have unconcsiously adopted those interpretive methods) will see this verse for what it is. A declaration that after the Lord's resurrection Jesus celebrated the Blessed Sacrament of his Body and Blood with the disciples for 40 days.

It is the same statement made by the author of Acts in 1:4, "And while staying with them" except no one would be able to twig this from the ESV's unfortunate translation. The Lord was not simply "staying" / "lodging" with them. But he was "eating the sacrificial meal" with them (sunaladzomai in Gk.).

The (RC) New Jerusalem Bible gets it better: "while at table with them" and even the less than reliable NIV (a mongrel of a translation) gets full marks for its translation, "while he was eating with them." Much more could be said about these 40 days between the Lord's resurrection and ascension, much, much more. But that is for another day.

When Jesus said of the Eucharist, "I tell you I will not drink again of this fruit of the vine until that day when I drink it new with you in my Father's kingdom." That was not a prohibition of drinking alcohol (as some Fundamentalists teach), nor did he (only) mean in the next life. But following his death and resurrection which events inaugurate and constitute the Father's Kingdom.

Every thinking Lutheran knows that if you "cut Scripture at any point it bleeds Christ." And that, "all theology is Christology". But those slogans easily stop us in our tracks, and prevent us from saying what else MUST be said. Namely that: as you can't have God without Christ, you can't have Christ without liturgy and you can't have liturgy without Sacraments. These holy, divine rites and rituals instituted by Jesus give us Christ in the flesh; the remission of sins, life and salvation. And there is no other way worth having him: the Word that "became flesh and dwelt/dwells among us full of grace and truth." (Jn 1:14)

Christian Response To "Wokeness" - Must See