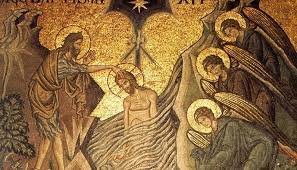 John would have prevented him, saying, “I need to be baptized by you, and do you come to me?”  But Jesus answered him, “Let it be so now, for thus it is fitting for us to fulfill all righteousness” (vv. 14, 15).

What does it mean, that Jesus and John “fulfill all righteousness”?  John was endued with the Spirit of prophesy; yet not fully read-in to God’s end time program (Mt. 11:3).  Of John and Christians, Jesus teaches, “the one who is least in the Kingdom of heaven is greater than [John]” (v. 11).  “Kingdom greatness” resides by death to sin (Rom. 6:3, 4) through Baptism into Jesus’ blood, enlightened in resurrection Wisdom.

JB called Jews, “Repent, for the kingdom of heaven is at hand” (Mt. 3:2).  No doubt the visual of a boisterous man in camel hair, subsisting on bugs was off-putting; still “all Judea” (v. 5) responded,

In every age prophets warned against idolatry.  John, the last and greatest, sought Israel’s repentance.  Foreign attachments generated damning emotions, ennui and fear, so that “all Judea” came to John; what drew them?

Earlier Isaiah had established JB’s bona fides (Isa. 42:3; Jn. 1:23); so, the people and even religious leaders (v. 7; Lk. 3:7) dared not ignore John’s message of Messiah imminence and his call to baptismal conversion.

Pointedly, John, the son of Zechariah, a chief-priest (Lk. 1:8-10), did not direct Israel to the temple, its cultic priesthood, or sacrifices for making one presentable to the coming king.  Instead, John initiated a new thing; reminiscent of Israel’s washing-out of Egypt and entry through the Jordan into the Promised Land; a call for re-dedication and putting-off of worldly accretions.

John announcing Jesus, on whom God’s Spirit would rest, declared him God’s New bride (Jn. 3:29, 30).  The old-time religion, having played the harlot in the world, no longer qualified for man’s access to heaven.  If “all righteousness [were to] be fulfilled”, old Israel would be supplanted.  Together Jesus and John would occupy offices that ushered-in “all righteousness”, herald and Voice of God.

Unlike Gentiles, Israel was a peculiar people.  God said to Pharaoh, “Israel is my firstborn son …  Let my son go that he may serve me” (Ex. 4:22, 23).  Israel came out of captivity as servant-son, redeemer and a blessing to the nations for declaring God’s salvation; releasing those captured in unbelief and reconciling all men in gracious intention.

All sin is sourced in an idolatry servicing our flesh and obeisance toward the things of the world.  Old Israel’s “service” was to be fidelity to Torah, leading the nations out of idolatrous lust and violence; turning hearts revealed in God’s Law.  Instead, Israel shamed God in bearing his Name.  Israel failed God’s righteousness in the world.

Centuries earlier YHWH prophesied to faithless King Ahaz, Israel’s discharge from its servant office.  In its place God would anoint the Virgin’s firstborn son (Isa. 7:14), New Israel out of her flesh.  Isaiah prophesied God’s salvation, “the LORD God has sent Me, and his Spirit …” (48:16d, 17, 18a); …  in righteousness … a covenant for the people, to be a light for the nations” (42:6).

We behold God’s New Covenant, the good news in exchange for old Israel’s infidelity; and by JB’s announcing Jesus, our absolution for restored faith.  Torah’s old and new teaching converges at the cross, sign-post of its content, “Jesus of Nazareth, King of the Jews”.

Still, John was uncomprehending; what repentance; what conversion; what did John have to do with “all righteousness”?  Jesus is the “Righteous One”, the One to whom others must be converted?  This is the point, unlike John’s baptism, Jesus initiated our ordination of thanksgiving into his Servanthood, bearing before God, in his flesh, the sin of the world.

Jesus directed that both he and John, “fulfill all righteousness”.  How; up and over the hill was the temple where on the Day of Atonement the high-priest offered sacrifice for sin?  Two goats were stationed at the Altar; one for the the high-priest, its blood brought through the cloud of incense into the Holy of Holies and sprinkled on the Mercy Seat and floor.

The high-priest returned to the Altar, laid hands on the “Scape-goat” transferring the nation’s sins sent into the desert, to be savaged by wild beasts; so too Jesus on his anointing by John “driven” into the desert (Mk. 1:12, 13) and thence the cross.

JB baptizing in the Jordan stood as counter-point to his father’s priesthood.  When Jesus, over John’s objection, directed John to baptize, John was at Jesus’ word was ordained chief-priest for effecting God’s New Covenant of righteousness.  Henceforth, God’s New Covenant would exist, not though the blood of bulls and goats, but the blood of God’s Lamb.

Jesus describes JB, “more than a prophet” (Mt. 11:9), a participant with him “in all righteousness”.   John anointed Jesus: Christ of God, New Israel, New Sacrifice to a Resurrection destined as New Temple and High Priest through whom Christians offer their Eucharist.  By Baptism we are attached to Jesus’ blood and death for a priesthood of “all righteousness”, an atonement from faithless idolatry.  Amen.