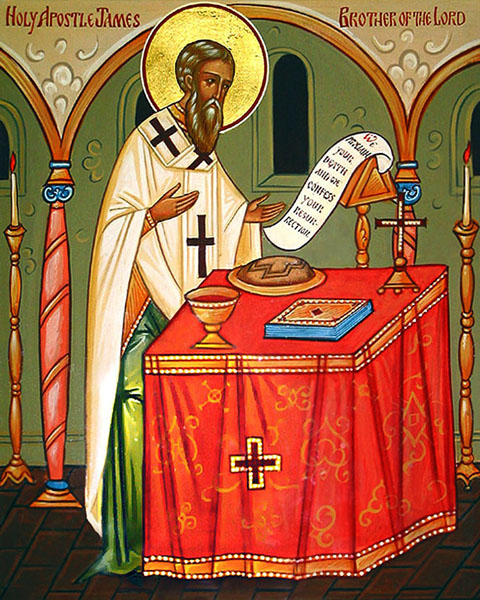 In the name of the Father and of the (X) Son and of the Holy Spirit.  Amen.

Dear beloved of the Lord:

St. James, whom we remember today, was Jesus' brother.  During Jesus' public ministry James was neither a believer nor a follower of the Lord.  In fact, together with  his mother and brothers and sisters, James tried to put an end to Jesus’ ministry.  St. Mark tells us in his Gospel that they tried to lay hold of Him, for they said, “He is out of His mind.” St. Mark 3:21

But after His resurrection Jesus appeared to James I Corinthians 15:7 and by His resurrection appearance Jesus converted His brother.  No longer Jesus’ opponent— James was now a steadfast believer in Christ and in Christ’s gospel of salvation.

James was so respected among Christians that the Church in Jerusalem made him their bishop.  It was this James (latter called JAMES THE JUST) who spoke the definitive word at the Council of Jerusalem (50 AD) concerning the Gentiles status in the early Christian church.  These are the words we heard today recorded in Acts 15:12-22a.

It was James who wrote the Epistle that bears his name.  We heard the opening verses of those inspired words of his today James 1:1-12.

Josephus (37-100 AD), the first century historian tells us that James was stoned to death by the Sadducees —because of his Christian faith.  Because he poured out his blood as a martyr — today the altar, the pulpit, the sacred vessels and our Bishop, the Presbyter, and the Deacon are covered in red — the color of blood.  All this red serves to remind us that James gave up his life for the faith he held dear — for the grace by which he was converted — and for the Lord who is his salvation.

So we give thanks today for James’ life — for his faith — for God’s grace given to him and for his conversion by Christ.

If it were not for the Holy Spirit's inspiration of James at the Council of Jerusalem (also called the First Apostolic Council) it's possible we wouldn't be here today as the Church.  Without James' words of welcome for the Gentile Christians, perhaps the Church wouldn't exist here today at all.

But the Spirit revealed to James that the future of the Church included us Gentiles.  By the Spirit, he quotes the word of the LORD delivered by the prophet Amos (active 792-753 BC): After this I will return and will rebuild the tabernacle of David, which has fallen down; I will rebuild its ruins, and I will set it up; so that the rest of mankind may seek the LORD, Even all the Gentiles who are called by My name, says the LORD who does all these things .  Acts 1:16-17 / Amos 9:11-12

By the enlightenment of the Holy Spirit James understood that the Gospel of Christ was not meant to trouble those from among the Gentiles who were turning to God (Acts 15:20) but to welcome them as brothers and sisters in Christ who now form the rebuilt Spiritual temple of the LORD.  The gospel is not meant to trouble the Gentiles, but to forgive them their sins — to free them from the bonds of the devil           that they may seek the Lord and be delivered safely into the One, Holy, Catholic, and Apostolic Church of our Lord and Savior Jesus Christ.

Look around and rejoice for “the Communion of Saints” gathered here before God’s Holy Altar giving thanksgiving for His “real presence” among us.

James knew that Christ died for the sins of the world — even the Gentile world.  James knew first-hand that Christ is risen from the dead — not just for Jews, but for Gentiles, also.

James knew that Christ — his brother — came to seek and save the lost from among ALL the people of the world.

James knew that Christ's salvation was a gift for you, for me, and every man, woman, and child who will ever live.

So by the Spirit's leading and by the grace of Christ

James welcomed all into the Church — even us who are gathered here today.

We do well to remember James today and to imitate his welcome to all — Jews and Gentiles, Judeans, and foreigners — people who look like and talk like and live like we do and people who don’t.

We do well to remember James today and to imitate his trust in Christ by whom he was converted and by whom we also are converted.

We do well to remember James today and to imitate his steadfastness in the face of persecution.  James died a martyr’s death with his faith intact and with his head held high.  He suffered at the hands of sinful men and gave up this life for the blessings of the better life, the life  of the world to come.

The truth James revealed by Christ and the truth that he still reveals to us today — by his words and by his life — this truth is no less true today than it was in Jerusalem 2000 years ago.

The Gospel of Christ is not meant to be a trouble to you who turn to God — but to grant you the blessing of salvation in Christ.

Regardless of your ancestry, your history, your past or your present: You who believe this gospel are welcomed by Christ into His Church.

Thank God for James, the brother of our Lord.

Thank God for his preaching of the gospel, for his welcome of the Gentiles, for his martyr’s blood because according to (Tertullian, Early Christian Theologian, 155-250 AD) “The blood of the martyrs is the seed of the Church.”

But even more than you thank God for St. James: thank God for Christ — James’s brother who converted James who has converted you and who has saved us by His life, death, resurrection, and ascension.

All Praise be to God.  Amen.

In the name of the Father and of the (X) Son and of the Holy Spirit.  Amen.

And the peace of God, which surpasses all understanding, will guard your hearts and your minds in Christ Jesus.  Amen