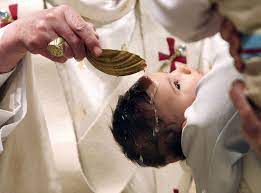 For the grace of God has appeared for the salvation of all men, training us to renounce irreligion and worldly passions, and to live sober, upright, and godly lives in this world … (vv. 11, 12)

God binds himself to us by water, blood, and Spirit; this is the import of Baptism. Perhaps as infants a Godparent spoke our assent to the verities of the catholic faith; and as guardians, they renounced on our behalf Satan and all his pomps and ways.

Baptism enrolls us into another registry. At birth we inherited a rebellious aspect against our Creator. By God’s action in water and Word we have been freed from the rule of the world’s self-proclaimed “prince”; restored to sonship.

So pervasive is our alignment with sin, that apart from Divine intervention, we are incapable of effecting, or even desiring release. We are born into Adam’s flesh, destined to a thralldom in league against the Lord and his Anointed.

Captured in sin we come into the world no better off than enslaved Egyptian Hebrews. God sent Moses for their rescue; though born a Hebrew, Moses renounced his ties to Pharaoh as a prince of Egypt. Likewise, God sent Jesus out of heaven for our rescue, a man like us in all, but sin.

Given subjection to “dominions, spiritual rulers, powers, authorities” and “kings of the earth”, today’s Gospel describing Emperor Augustus’ census, is ironic. On the eve of Jesus’ birth, mother and Child were registered subjects of Caesar.

The Nativity was Jesus’ departure from the ark of Mary’s womb, out of heaven (for where Jesus is there is heaven), to redeem all men under and condemned by the axis powers, of Satan, the world, and our flesh. St. Paul, puts it, “[God’s]… Son… born of woman, born under the law, to redeem those who were under the law” (Gal. 4:4b, 5a).

On the cross Jesus would burst the cords binding us to sin and our death by the righteous demands of the law; inviting us to release and a new allegiance in the Father’s love.

Like Israel through the Red Sea, Baptism’s wash in the red of Jesus’ blood cleanses us from the captive stench of sinful flesh, rulers, and authorities. Baptism, the power of God’s Speech with water and Fire, commands those binding us, “Let my people go, that they may serve me” (Ex. 9:1).

At Jesus’ nativity, his angelic host echoed the command, countering Caesar’s registration by proclaiming the Babe’s superior authority and power, whose “name is above every name” (Phil. 2:9), “Savior”, “Christ”, and “Lord” (Lk. 2:11).

Isaiah prophesied the virgin-born Child’s superiority for his church with superlative titles, “Wonderful Counselor, Mighty God, Everlasting Father, Prince of Peace” (9:6) of whose government every other contrary allegiance must be renounced.

Today the world, whatever its motives, declares Christmas “a happy time”; well, I guess so, but Christmas is not defined by lounge singers peddling vapid and often irreligious tunes. Rather it is, in the Church’s mass, that our joy is extant, responding in new song to God’s long-awaited solution over powers afflicting the world.

Make no mistake, despite all the seasonal “happy talk” there is this disturbing context; that the Babe has entered into the world’s hatred of him; first exhibited by Herod, and “all Jerusalem” being “shaken” at the Child’s advent reign.

As Pharoah chased Israel through the Sea; Herod sought Jesus’ death, God’s new Israel, slaughtering Bethlehem’s “Holy Innocents” (Mt. 2:13-18). Not only did the secular and religious authorities conspire in the Child’s death, but on the cross our new-born king would indeed be slaughtered at the time and place where our passionless God, would engage the great sorrow of the “via dolorosa”, (this is a mystery).

This Christmas, the Church, introduces us anew to our true God, whose only Son would be wrapped in cloths foretelling his humble passion and abandon on the cross, waiting his Father’s love in the Resurrection. Of competing allegiances, and God’s “dolorous” over sin; St. Paul reflects on the conundrum of our salvation in Christ, “I do not do what I want, but I do the very thing I hate.” (Rom. 7:15).

Baptized into Christ; still, we remain under the world’s sway. With Adam’s fall we were separated from the “Bread of angels” (Ps. 78:25); consigned to food from a cursed ground; so, at the end we breathe our last of the dust from which we came;

Yet, St. Paul prescribes the antidote: Baptism’s power and the purifying blood of Christ, both “training us to renounce irreligion and worldly passions, and to live sober, upright, and godly lives in this world …”

With the Nativity, a great Light entered our darkness. The Babe, swaddled and lying in a manger is heaven’s Bread for men who, under Satan’s thrall ate and acted as beasts. Of this Bread we join the sung angelic joy, Gloria in Excelsis Deo, him who is greater than all “rulers and authorities” in heaven and earth.

By our acclaim, the Babe, who is the Power and Speech of God, calls us to what we cannot do of ourselves, a new enrollment by the HS into his heavenly host; to receive new begetting in water and Word for a new name; to participate in the Babe’s victorious warfare at the cross, the place of atonement for resurrection worship of the only true God.

It is an Advent convention that the Church suspends her “Gloria in Excelsis Deo” awaiting restoration in today’s mass; thus, we inquire of our joy, “who are those upon whom God’s favor rests?” (Lk. 2:14): certainly, the believing shepherds, Joseph, Mary, and on the thirteenth day of Christmas, the Epiphany’s seeking Gentiles represented by the pagan “magoi”.

Today we too seek the Babe, “Immanuel-God with us” by an improbable hospitality of Resurrection power in Word and Sacrament; it is these upon whom God’s favor rests, whereby heaven’s new registry is affirmed.

Think of what your “renunciation” asks you to give-up; in Christ we deny self-righteousness, self-sanctity, and fleshly concupiscence. Renunciation of these is difficult, they are of our nature. Yet, we make no “decision for Jesus” unable to do so without qualification, condition, or vanity, arguing against God’s work alone by his Anointed.

Jesus, on the cross and always, is true Son who serves God; and like him whom the Father raised to life, we join in witnessing the work of our “Wonderful Counselor” (Isa. 9:6b) for God’s new creation coming into being among us. Amen.