The Feast Of Committment 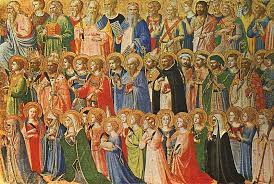 All Saints
THE FEAST OF COMMITMENT
Hebrews 11:24-26

Wealth, fame, and status have so often been the excess ballast that pulled people under because they could not let it go and float to the top. That is a hard option, even when it is clear-cut, which it usually isn't. By the world's standards, the choice Moses made was very unusual, but our text assures us it was the choice of faith. Moses chose to be mistreated with the covenant people of God. If he had kept quiet about his origins, no one would have known that he was not Pharaoh's grandchild, or that he was a Hebrew, and therefore assigned to slavery in the brickyards of Goshen. Moses made the disclosure by faith. That is what makes a person a saint - faith.

If your wealth, fame, and status are available to do good, to help the needy, to promote the work of the Holy Church, to relieve sufferings of all kinds, then it won't be weighing you down. Possessions that one holds loosely, and lets go of easily, won't hinder anyone from swimming with the Lord. There are many degrees of commitment. Not everybody has a vocation to poverty, to letting everything go, to traveling about empty-handed, like John the Baptist. On the other hand, to be anchored in the vanities shows that you are truly committed to them, rather than the Lord.

St. John, in his First Letter, calls faith the victory that overcomes the world. Moses is a good example of this. Without faith he could not have exchanged the luxuries of Pharaoh's house for the bondage that attended true holiness. He could never have become a saint. He might have gone down in history as a decent, wise Egyptian ruler, but nothing spectacular. By faith he chose holiness instead, the road that led to Mt. Sinai where he saw the glory of the Lord, and in his own hands held the tablets that God had written on. Do you suppose he might have thought he was dreaming? The tablets were very real. Had he dropped them on his foot it would have hurt. As for the writing on them, it was probably the first time anything had been written in Hebrew. Moses spoke Hebrew with his people, but nobody had written it before. One can imagine the Lord going over everything with Moses so that he knew what all the little marks meant. Later, Moses would write the Torah in that language, but on Mt. Sinai he had nothing with which to write. All he could do was kneel on the ground in wonder over what he had seen.

There is a great picture! To be a saint requires humility, because faith cannot exist without humility. One cannot serve God while he serves himself. If you regard yourself with dignity and esteem, then God's praise is not in your mouth. You are first and foremost a sinner, whose attitudes are entirely ungodly. Praise is comely for the upright, but no one starts off upright. It is only by grace that any of us have a right to praise God. Humility is the quality that permits us to hear, to step down from wanting to be heard, to listen with a quiet mind. By hearing the Holy spirit creates faith. That makes the critical difference. In faith we receive the genuine joys of sainthood. Consider these words from the 34th Psalm:

Those who look to Him are radiant, their faces are never covered
with shame, the poor man called and the Lord heard him; He saved him
out of all his troubles. The angel of the Lord encamps around those
who fear Him, and He delivers them.

So, would you like to be radiant? Moses was. When he had been talking with the Lord in the Tent of Meeting, his face radiated when he came out. He had to wear a veil because nobody could stand to look at him. Sinners cannot look upon what is holy. When we turn, in obedience, from God to face those we serve, we cannot show our complete holiness, because it would destroy them. The Spirit who dwells within us is so powerful, so filled with all-surpassing wisdom, so comforting and peaceful within, so merciful and compassionate without, a mere look from a true Christian can turn an unbeliever away with guilt. But the Spirit wants us to look upon those who need our help. It is for their sake we are sent into the world. So expect crosses, afflictions, and troubles. God places them over us like the veil Moses wore. The Holy Spirit dwells in us, but we do not possess the Holy Spirit. He constantly renews His presence in us as we turn to the Word and Sacraments, for that is where we remove our veils and let God serve us. The indwelling is always his choice, not ours.

Does that mean we have afflictions all the time? Who wants to live like that? Be assured, it was never God's intention to leave us in misery. Rather, He delights in delivering us. By faith Moses ordered the lambs killed, the doors painted with blood, the matzohs baked, the families gathered for the feast of commitment. Once they survived that night of terror, there would be no going back to what had been. By taking part in the Lord's Passover, they were committing themselves to the desert, the Holy Land, the Temple. But the Lord made an even bigger commitment. Nothing could turn Jehovah's face from them, not the Red Sea, not the Amalekites, not even their own idolatry. He asked that they turn to Him. When they did, there was deliverance, there was manna, there was a victory, there was a bronze snake, there was a clear manifestation of divine grace.

What do we have that corresponds to that feast of commitment? We have the record of the greatest commitment of all, the commitment even to death that Jesus made to us. We have the Gospel of His resurrection, His ascension, and His promise to return. There can be no doubt that He is 100% committed to us. We turn to Him, repenting of our sins, hearing His sacred Absolution. All because He is so committed to us, we need no works of righteousness, but true repentance, letting the Lord serve us, letting him nurse us with His own flesh and blood. So the grace we receive makes us holy. We cannot face those who are still in slavery unless we put the veil back on. Faith began in humility, it approaches the Fountain of Life in humility, and it serves in humility after being served, reflecting the deepest commitment ever known. The faith of all saints is the faith of the cross. AMEN.