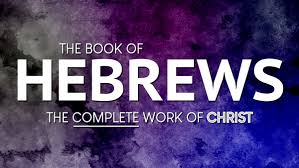 After much study and analysis I have a theory about the Book of Hebrews; that it is the transcript of a Divine Service from beginning to end. Imagine a court reporter taking down every word of a normal Eucharistic liturgy in the LCMS (p. 184). It would open with the invocation and close with the benediction or possibly a parting hymn. Every word would be taken down but in narrative fashion, with no formatting for versicle / response etc., nothing to indicate hymnody or prayer. One continuous flow. One long narrative.

That is what I suspect we have with the so-called Book of Hebrews. It opens with reading / praise / worship from the prophets (as per Justin Martyr). The priest conducting this particular mass did what Paul did in Thessalonica (Acts 17:2-3 And Paul went in, as was his custom, and on three Sabbath days he reasoned with them from the Scriptures, explaining and proving that it was necessary for the Christ to suffer and to rise from the dead, and saying, "This Jesus, whom I proclaim to you, is the Christ."

This mass includes various offerings of out and out praise from the Scriptures (such as the entire 1st chapter). It includes much teaching and paraenesis i.e. the Liturgy of the Word. From 10:25 to the end we have the Liturgy of the Sacrament along with a formal benediction (13:20) and "parish announcements" if you like. The marriage bed of 13:4 is Eucharist where the Holy Bridegroom intimately meets with his baptismally cleansed Bride. The showing of hospitality is to welcome those who have been vetted to their table. Chapter 11 is Eucharistic prayer which, among other things, remembers the saints of old. There is more.

This probably-mid-first-century liturgy is conducted among Jews who had accepted the Christian faith but were no under extreme pressure to give up their erring ways and return to Judaism. They are faltering in their conviction. Thus the nature and tone of this mass on this Sunday among these people, by this priest / presbyter.

Again think of the court stenographer taking down every word of your mass, and then presenting it to you as one long narrative. Could that be what the Book of Hebrews is? If so there is a great deal more to learn from it than only doctrine and morality. If so then we have a 1st century mass in the Bible itself. The "complete work of Christ" factually given to men in Divine Liturgy. The story fulfilled, and it's enactment among redeemed sinners.