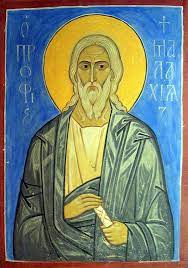 I think we can safely assume that what was originally the prophecy of the prophets, in time, became fixed into a liturgical format that was read aloud, and antiphonally prayed by faithful Israel in her worship. The context of the entire book from start to finish is addressed to worshiping Israel and her clergy.

Further this prophet it is easily divided into versicles and responses; and whenever we find that in Scripture we should assume that that is how it was used by the church then, and should be now. And so it is not only the Psalms that are the "prayer book of Israel," but so is all of Scripture (serving as liturgy, lectionary and enchiridion - especially the Greek version LXX).

That said let us consider the reading for the Last Sunday of the Church Year: (my translation)

13 Your words have been stout against me says the LORD. But you say, "How have we spoken against you?" 14 You have said, "there is no benefit in worshiping God. What is the profit of our keeping his charge or of mournfully processing before the LORD of Hosts? 15 So that now we call those who are insolent to God the blessed ones. They perpetrate wickedness! They tempt God! And get away with it!"

COMMENTARY: When and where are these words spoken by the people? In
their worship where the LORD is incarnationally present and hears their cobbled together liturgy, their powerless preaching; and their less than sincere confessional processions into the house of God. The less-than-orthodox liturgy is preserved here for us to warn us against the same. So that we do not become, among other things, Saturday night liturgy writers.

COMMENTARY: If one does a surface translation he comes away with what all the English translations have "those who feared the LORD spoke with one another." But with such translation: the salt has lost its savor. Antiphonal prayer before God is the oldest and most regular form given us in all the Scriptures. Also keeping in mind that the Masoretic Text is fully cantilated we can assume that it was given voice musically in the form of chant. (I think in this respect the EO have it right. If you attend EO liturgy you will soon discover that every last word is chanted.)

Moreover we should instantly transpose "Book of Remembrance" into a NT sacramental key: both baptism and Eucharist. To do anything less is to skim the surface, and to never penetrate the meaning.

17 "They shall be mine!" says the LORD of Armies on the Day when I ordain them as my own treasured possession; and I will spare them as a man spares his son who serves him.

COMMENTARY: We have shades here of the Passover when the firstborn was spared by the Lamb's Sacramental Blood. But there is more. The verb "asah" in Hebrew - "to make or to do" - I translate as "ordain" because of the context. Here our attention should immediately be directed to 1 Peter 2:9 ff where we find the royal and priestly nature of being his Church.

18 Then once again you shall see the distinction between the righteous and the wicked; between he who worships God, and the one who does not serve him.

COMMENTARY: Also in v. 18 we can translate the Hebrew "avadh" as "worship" or "serve," as long as we remember the liturgical context of it.