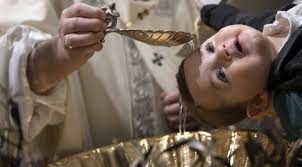 The epistle for the Last Sunday of the Church Year is a beauty; see my translation below. Besides the divine knowledge that it imparts to us - unknowable by any man except God should reveal it - there is the matter of its format.

I organize it in the form of versicles and responses because it so naturally accomodates that oldest and most well-known form of Holy Christian Prayer. If it was not originally written and engaged in this manner, it soon became so. This is not an essay that Paul is writing here, nor an abstract "letter." But Colossians (as well as Ephesians and 1 Peter) are baptismal addresses directed to the newly baptized in said churches (and which were soon spread to all the churches).

Herein S. Paul by the inspiried pen explains who Christ is, what he does for us, and how we become partakers in Him. Baptism must be seen as a "locational reality." The movement of the believer from one domain (Satan's) into the person of Jesus himself. So that he is "dressed or clothed in Christ" as S. Paul says to the Galatians. If we are so covered and clothed with Christ himself, then our Old Self is no longer seen by God, but only our New Self with Christ as our covering. As such we have: "redemption, the forgiveness of sins." (v. 13) Reconciliation.

13 Who has delivered us out of the domain of darkness
and moved us into the kingdom of the Son whom he loves;

14 in whom we have redemption,
the forgiveness of our sins;

15 Who is the icon of the invisible God,
the first-born of all Creation.

16 For in him all things were created
in the heavens and upon the earth.

all things stand created
through him and for him!

17 He is before all things,
and in him all things consist.

18 He is the head of his body: the church.
He is the source, the firstborn from the dead

19 For in him the fullness of God was pleased to dwell.
20 And through him to reconcile all things to himself.

Making peace by the blood of the his cross
whether things on earth or in heaven.